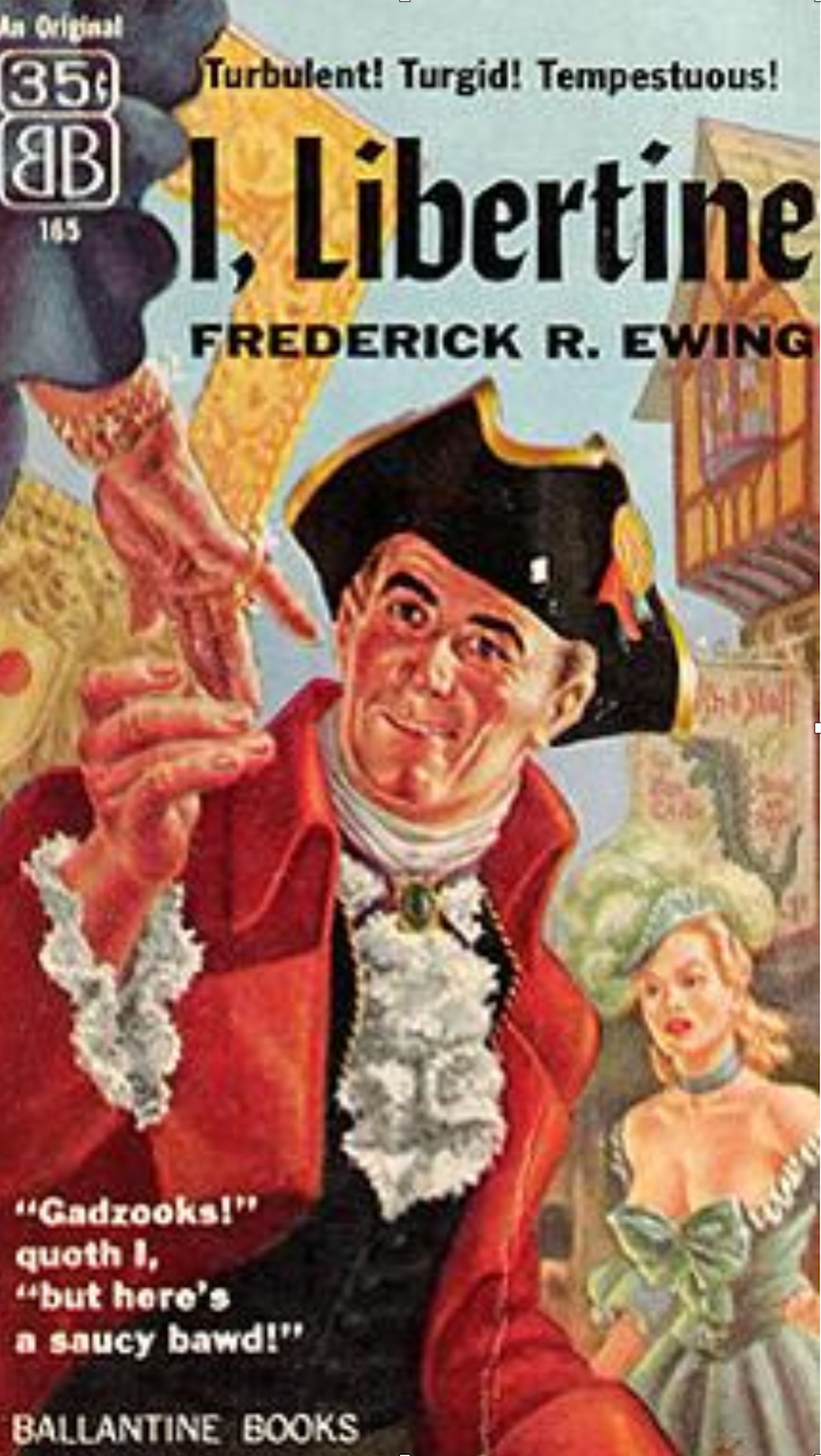 I, Libertine is a literary hoax novel that began as a practical joke by late-night radio raconteur Jean Shepherd.

The Story of "I, Libertine"

Let me start by saying that I am a musician and not a writer, I hope you forgive my humble attempts at relating this great story, but someone had to do it. The info that I am about to relate is pretty much verbatim, as I culled it from a January 1968 tape of Shep being interviewed on The Long John Nebel Show on WOR in New York.

When Jean Shepherd first came to New York from the midwest, he had a very different idea about what radio should be. At that time, (and especially now) radio was highly formatted. Back in the early 50's there were still radio-dramas held over from the 40's, but mostly djs were the prevailing format. Shep's idea of radio was to treat it like a blank page, in which to express his ideas, about whatever. The fact that he was on all night was a strong influence on how the show developed. Up until then, the 12-5 am slot was for background (what would today be called "elevator") music. WOR didn't think it paid to even keep the studio open so they put Shep out at the transmitter in Carteret, NJ!

Well, this was the very beginning of what became known as "black comedy ". Satire was unknown. Comics like Mort Sahl, Lenny Bruce, and Shelley Berman were not on the scene yet. Shep was a true revolutionary in this medium.

Anyway, as Shep said, "New York was a city that was entirely run by lists." Nobody dared go to the theater without reading ten reviews first! If Clive Barnes said the show was good, it was good. "Even if you fell asleep in the first act, you somehow felt that it was your fault!

Did it ever occur to you that lists are compiled by mortals? When the Oscar is awarded for Best Picture was it really the Best Picture? Well, everyone is influenced by these critics. You may laugh at the people who read the Daily News, but then YOU believe in the New York Times !"

"Did ever occur to you that the guy responsible for compiling these lists was some little guy who was stuck for four years doing obituaries. Now it's his job is to call bookstores and find out what's selling this week.

Well, Fred Applerot recently bought 500 copies of "Who Shot John", and he still has 497 copies on the shelf. The guy calls and asks what's hot? 'WHO SHOT JOHN"! BIG HIT! Well, the little guy puts it on his list and soon everyone goes out and buys it!"

"At 3:00 am the people who believe in lists are asleep. These are the people who get all the latest hit show tickets. Anyone still up at 3 am secretly has some doubts. There are only two kinds of people. Us and Them. And they don't know that we exist!"

It was about this time that Shepherd created a term which became part of the language. "Like hot diggety dog!, or Gosh!" He said that there were two kinds of people. First, there was the guy who believed in day time. He felt most alive from 8-6. Meetings, lunches, deals, that was his thing. When he came home and flopped in front of the tv with a beer, it was dead time. Over. To sleep.

Then there's the other guy. His time is at 2 or 3am. He might still have to get up at 7 am but at 3 am, that is when he is in his own private world. He is a NIGHT PERSON.

The point was that these two types rarely meet, or know much about the other's world. (Shep was given credit in The American Dictionary of Slang and Usage for creating the terms "Night People and Day People".)

"Now, these two groups are constantly battling. but they don't know that they are!"

The Day People truly believe in lists. And prices. A $20 ticket HAS to be better than a $1 ticket. The Top Ten Movies MUST be better than the Second Ten! "Now, when this guy turns on my show, he thinks we're crazy! What is that idiot talking about? Then he puts on WPAT (Muzak), the opiate for the masses."

At about 2 am one night, Shep said to his listeners, "let's all go to the local book stores tomorrow and ask for a book, that we, the Night People, know doesn't exist." Since it was a communal thing, he asked the listeners for suggestions for a title. Finally, at about 4:30 am someone came up with "I, Libertine". Shep then created an author, Frederick R. Ewing, formerly a British Commander in World War II, now a civil servant in Rhodesia, married to Marjorie, a horsewoman from the North Country. He was best known for his BBC broadcasts, on 18th century erotica. He was published by Excelsior Press, an imprint of Cambridge University. Now who's gonna argue with that? British--Cambridge--a wife named Marjorie?

So what's next? The first guy walks into the store and asks for "I, Libertine". The owner says he never heard of it. Man number two walks in asking for it. Now he says "it's on order." The next guy comes in. Now he's on the phone to the distributor. " Well, after 350 more guys ask for it, Publisher's Weekly is in shambles!"

You must remember that the listeners KNEW that this was a nonexistent book!

By the next day, reports started to come back. One guy said:

"For years this guy in the 8th Street Bookshop had me buffaloed. You got the feeling that HE actually wrote Kierkegaard! That he was behind Spinoza! If I mentioned Proust he would say, 'the trouble with Proust was that he never matured.' So I asked him about Ewing and "I, Libertine". 'It's about time the public discovered him!' I had him! It was great!

A woman at her bridge party mentioned it. Immediately a discussion broke out and three women decided that they hated it!

Airline pilots, who were listeners, started asking for it all over the world. Then a kid who was going to Rutgers wrote Shep: "I'm taking this course in the History of English Writing. I did my term paper on F. R. Ewing, British Historian, with footnotes and quotes from the BBC broadcasts. I got a B+ and the professor wrote 'Superb Research!' My God, maybe there was no Chaucer! It could have been some guy 400 years ago putting on the whole world!

Then, in Earl Wilson's column appeared a blurb, "had lunch with Freddy Ewing yesterday." The PR people who fed the columns were also Shep listeners! It was even reviewed by one of the major book supplements of the time! The reviewers were also fans, and Shep told all the listeners to "put your little hooks in, wherever you can."

As Shep said, "I felt like a guy at the bottom of a mountain who threw a couple of pebbles up and suddenly a 400 trillion ton avalanche falls on him!" Comments continued to appear all over in newspapers. One guy's boss asked him what he thought of the book. Did he read it? "What could I say?"

Shep said he was afraid the the President would mention it. "Then I wouldn't believe in anything!"

There were articles in Life, Newsweek and Time, however the ultimate was yet to come.

It was placed on the proscribed list by the Arch Diocese of Boston! Banned in Boston!! At the end of the 7th week it was on a nation-wide best-seller list! It was now a best seller in Rome, Paris, London. Remember, the people asking for this KNEW that it didn't exist.

On a hot, humid August day, Shep got a call from a reporter on the Wall Street Journal. He told him that he thought it was time to break the story. He said, go ahead. The following day, the story came out-front page, middle section. It hit the newsstands at about 3:00 pm.

"At 3:01 pm about six countries called. It became a world-wide story.

It was also one of the only stories that was reprinted word for word by Pravda! Remember, that at no time was there any PR done for this. As Shep would say, "It was the beginning of an attitude that people have had up to today. People up until then never questioned politicians or Big Government like they do now."

There was an amazing follow up to this tale. After the story broke, Shep was having lunch with the late, great writer, Theodore Sturgeon. "Ted said that Ian Ballantine was running all over the world looking for the paperback rights to "I, Libertine". I told him I'd introduce you to him." Well, they all got together over lunch. Shep, with Ted Sturgeon, knocked out the book, and it really then became a best seller! (Incidentally, all the profits went to charity.)

I happened to be lucky enough to find a copy years ago in a used book shop, and still have it. Autographed by Shep, no less! The cover was illustrated by Kelly Freas, who you might remember as one of the main Alfred E. Neuman artists over at Mad.

As Shepherd later said, "Few touched on the real point of the story. Most papers got it wrong, and said things like-'Disk jockey sells non-existent book to listeners'. It was the LISTENERS who sold a non-existent book the to WORLD! Only The Wall Street Journal, and the overseas press got it right." The Day People didn't like being had.

The London Daily Express wrote of it as one of the greatest hoaxes of all time.

Well, there you have it. At least what I know about it. You see, there's more to Jean Shepherd then nostalgic Christmas Stories.

Judging from the response that Jim Sadur and I have been receiving from our Shepherd pages, maybe someone out there would consider playing on the air, or selling some of those old radio shows. Lots of folks would sure be interested.

Uploaded by radioannouncer on September 21, 2020